Kaplons: Once the Crown Jewel of Downtown Brunswick Shopping

When Kaplons department store closed its doors in the spring of 1967, it was the beginning of the end of downtown shopping in Brunswick.

It took another 25 years before other anchor Potomac Street businesses closed, but Kaplons‘ demise due to the retirements of second-generation family members who operated the business, along with the exodus of the B&O Railroad operations, marked the end of an era when shoppers could buy fine merchandise in town without having to take a much longer trip to Frederick, Baltimore, or Washington. The sad photo of merchandise marked down by one-third at the Kaplons’ “Going Out of Business” sale was something Brunswick residents never imagined they’d see. 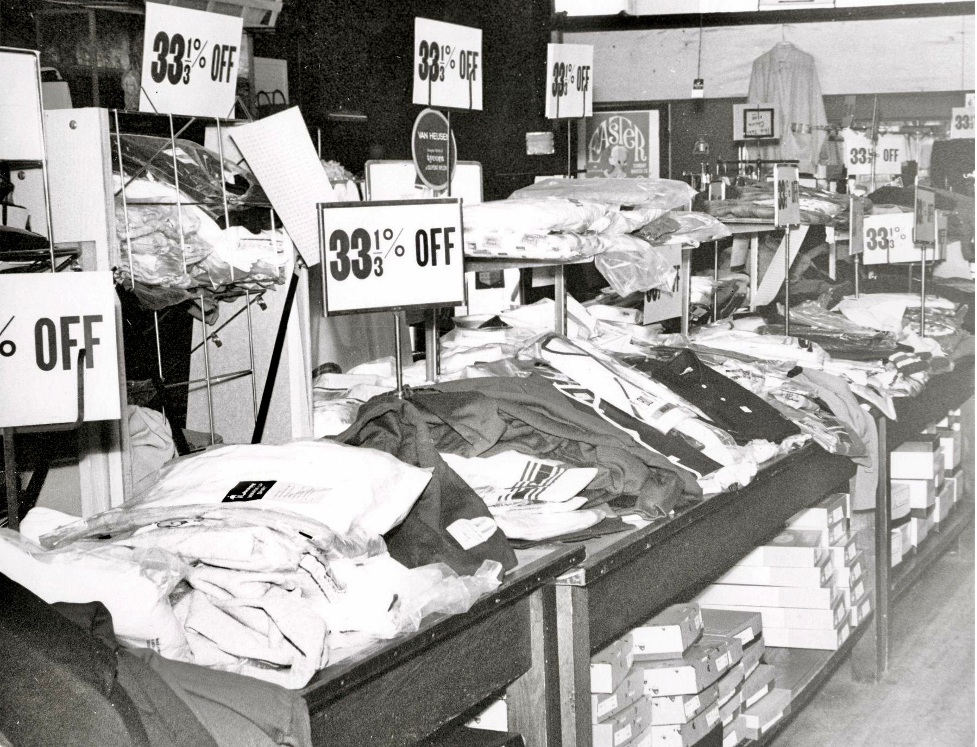 Kaplons “Going Out of Business” sale in 1967

From her home in Myrtle Beach, S.C., longtime Brunswick native Doris Kelley Barker remembered: “It was a store like Kemps, Hendersons and Parsons in Frederick. (Frances) Fanny Kaplon bought only from the best designers for our little railroad town. She rode the train to New York at least twice a year, selected good clothes and had them shipped to her store.”

According to the Brunswick History Commission book, Brunswick: 100 Years of Memories: “The preparation of window displays for Christmas was always eagerly awaited, as were the Friday the 13th ‘Black Cat’ sales.”

In the 2012 Smithsonian Journey Stories video “The Way We Worked”, Charlie Smith told how “It was the coolest thing in the world to stand there and watch them open up the Christmas displays. Miss Fanny pulled down curtains in front of the store windows so you couldn’t see in. There would be 200 or 300 people standing there on a Friday evening because every other Friday was payday and payday was huge; the railroaders made great money.  Then she would open up the Christmas windows one by one (to reveal) the Christmas displays.”

The Victor Kaplon Co., Inc., or Kaplons department store, as it was commonly known, operated at 102 W. Potomac Street on the corner of S. Maryland Avenue from when it was built in 1907 until it closed in 1967. The City of Brunswick recently purchased the historic building.

All told, the Kaplons sold quality merchandise in Brunswick for 78 years beginning with the first location, which founder Victor Kaplon opened in 1889 in the old Opera House building on the south side of the present westbound railroad route in the old town “Between the Tracks”. 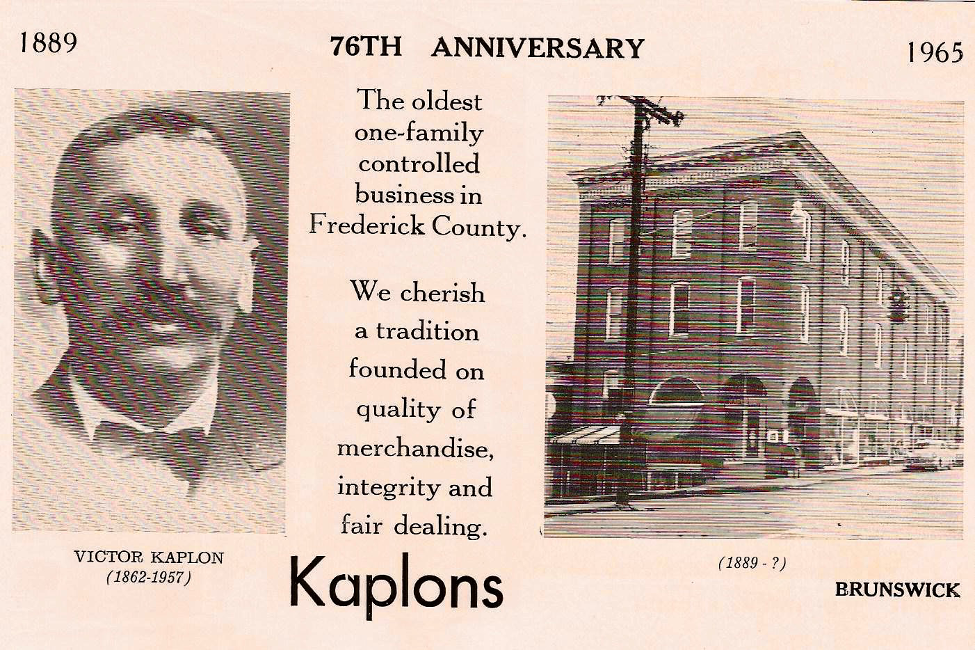 Where the story begins

Victor Kaplon emigrated from Russia in 1885, crossing the American border under a load of hay. He immigrated to New York with 15 cents in his pocket. Once there, he peddled pencils on the street and saved to send for his wife and daughter. In a few years, he sold wares throughout the Tri-State area at first on foot, then by horse and wagon as did many early Jewish settlers in the region.

Mr. Kaplon came to town in 1889 just as the B&O was establishing its railroad operations in the up-and-coming town where he opened his first store with his brother Abraham, who also ran a general store in Harpers Ferry. “Vic” Kaplon, as he was affectionately known around town, lived to be 95 years old and was a fixture in the store for much of his life until he died in 1957. Most of the family lived on S. Maryland Avenue below the store.

In the early days, the store on West Potomac Street housed “three floors and a basement. Furniture was sold on the 3rd floor, ready to wear on the second, and clothes for men and women, dry goods and shoes on the first”, to quote his eldest son Amos Kaplon’s memoirs.

The “English Basement” later served as a bowling alley and finally a bargain basement for goods, primarily clothing, that were marked down. There was a downstairs entrance to the basement on the S. Maryland Avenue side.

According to an article from The Evening Post in 1912, Kaplons carried “a large list of general merchandise and makes a specialty of house furnishings. Mr. Kaplon keeps his stock constantly up-to-date and each season representatives of the company go to the metropolitan centers for the purpose of buying goods of the most modern kind.” By 1912, the Kaplon Company store began a mail-order business in addition to the in-store merchandise he already provided. The Brunswick store was headquarters for the family business, including the Harpers Ferry operation. 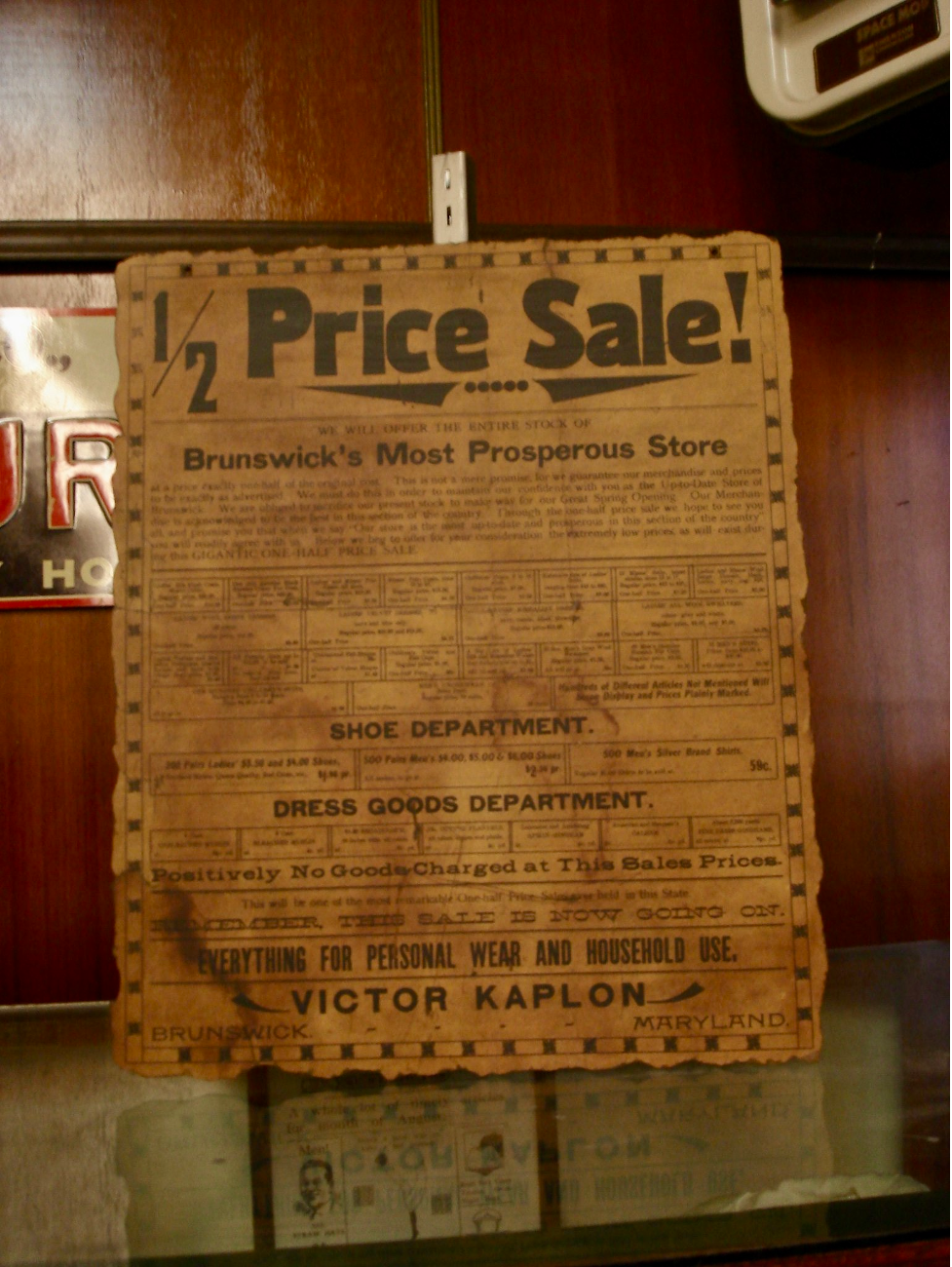 Kaplons in the Smoketown Boomtown Years

Springing forward to a time many of us old timers can still remember, the photos you’ll see in this article should give you a sense of how the store was laid out with merchandise stacked on shelves all the way to the ceiling. Customers were well dressed. 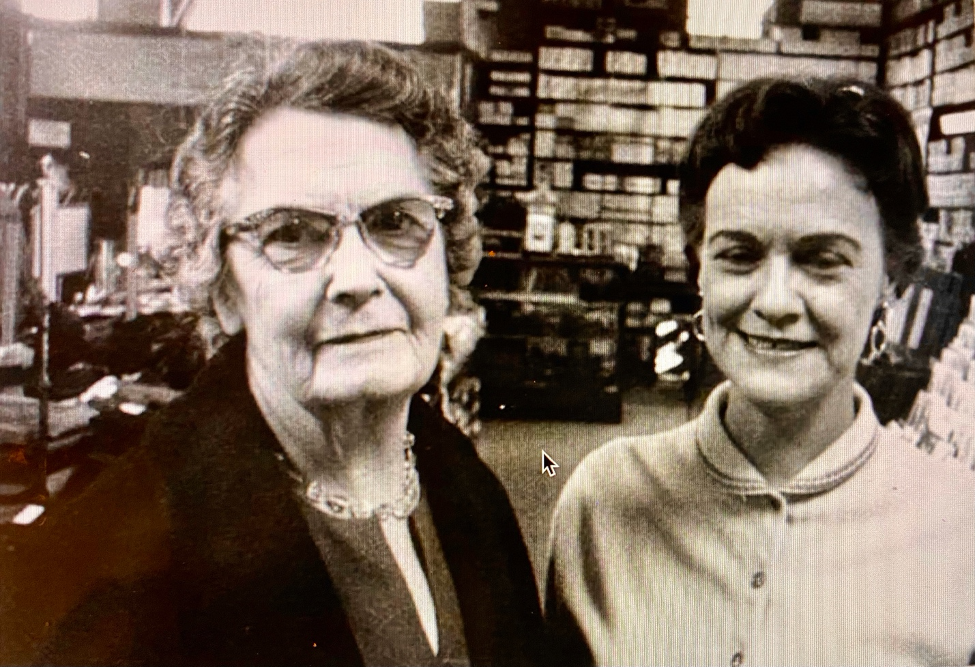 In the “Journey Stories” video, Wendell Stewart told how “On Friday or Saturday nights, the stores were always crowded. Kaplons carried first class stuff all the way—Hart Schaffner Marx suits for men, which were first class back in those days, Stetson hats…” 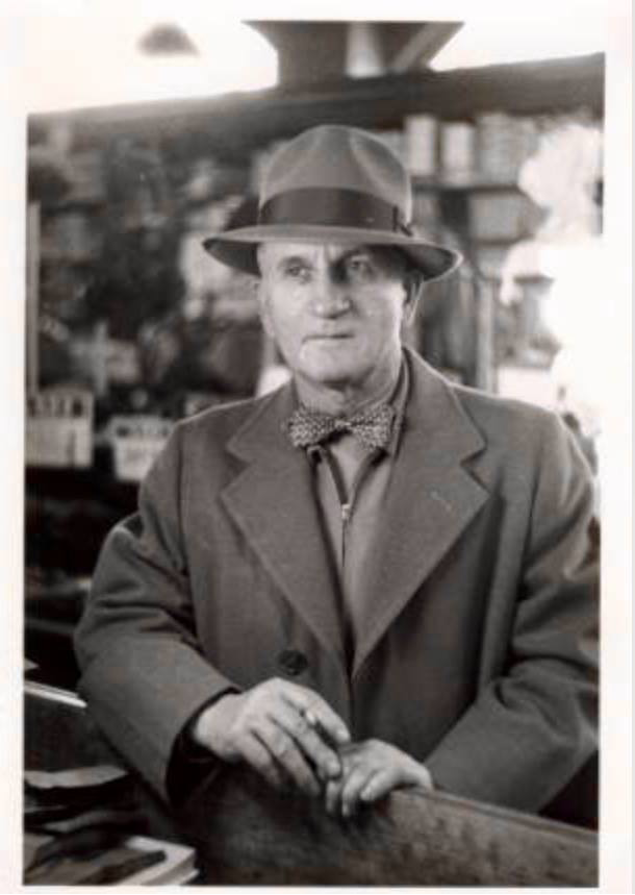 A dapper Clarence Miller being waited on at a sales counter

In “Journey Stories” , Bill Mohler said that “Kaplons sold Florsheim shoes, alligator shoes, and the finest of suits and men’s clothing. Miss Fanny went to New York to pick up the latest fashions, which she’d display in the windows and the ladies would buy clothes, dresses everything. Kaplons had a nice display of clothing, and a lot of people came from all over the county.”

The well-known progeny of Victor and Ida Kaplon who were critical to store operations from the early days on W. Potomac Street until its closing in 1967 were Abraham, known as “Amos”, Myer, and Frances or “Miss Fanny”.

Amos Kaplon was the primary salesman. He was highly knowledgeable of the merchandise, particularly men’s wear and shoes. As a young man, he was an outstanding baseball player on the barnstorming Brunswick town team. As a teenager, he was offered a Major League contract by the Washington Senators but was forced to decline due to his responsibilities at the store. Amos was also an accomplished inventor, known around town for his collapsible minnow nets among other innovations for automobiles that kept him busy following retirement. He lived until 1987 when he died at age 98. 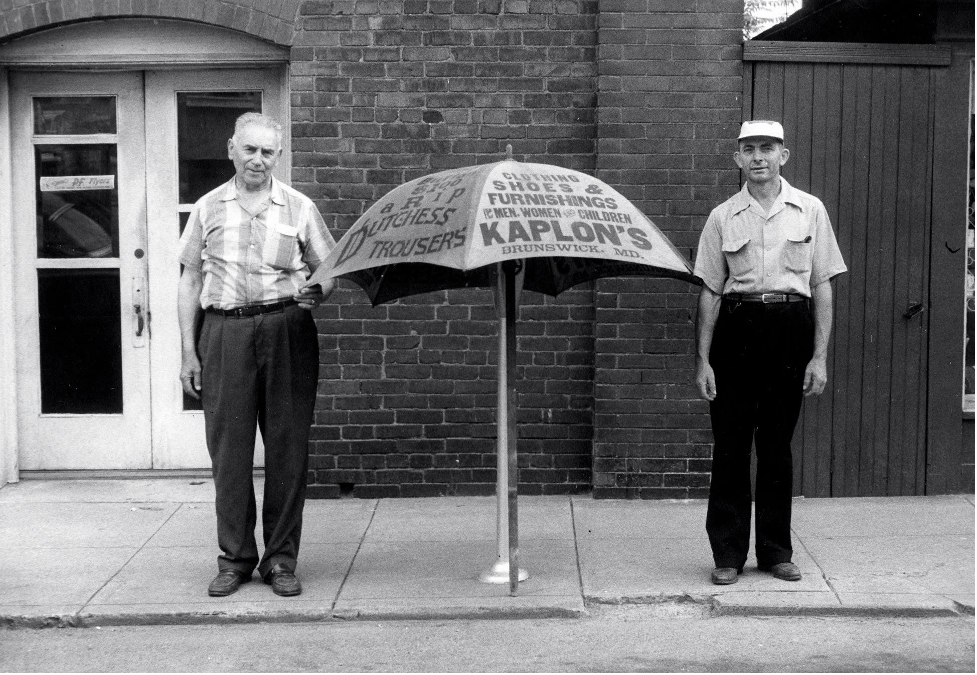 Myer was the Wharton School of Business educated store manager, who had many talents. He was known around town for his random acts of kindness and as an accomplished amateur photographer. He loved children whom he would photograph in the store. He would walk around town with candy and during Jewish holidays, unleavened bread for kids of all religions. Velva Cooper remembered when Mr. Kaplon would come for visits with the African-American children on Shady Lane in Petersville in the 1960s and ‘70s.

Myer Kaplon served an unofficial role as “town photographer”, for which he refused to ever accept a penny. You can see his many volumes of local photos, which chronicled scenes and events from the 1920s until his death in 1978 at the Public Library in Brunswick. For years, he also wrote a regular column in the Blade-Times newspaper under the pseudonym “EMKAY”.

To observe his Jewish faith, Myer refused to ride in a car from sundown on Friday until sundown Saturday and could be regularly seen carrying his camera while walking up Petersville road to his unique “steel house” on Rosemont that was built from a design he saw as an archetype at the 1933 World’s Fair in Chicago. This writer remembers seeing him from our dining room table walking home on Saturday evenings. 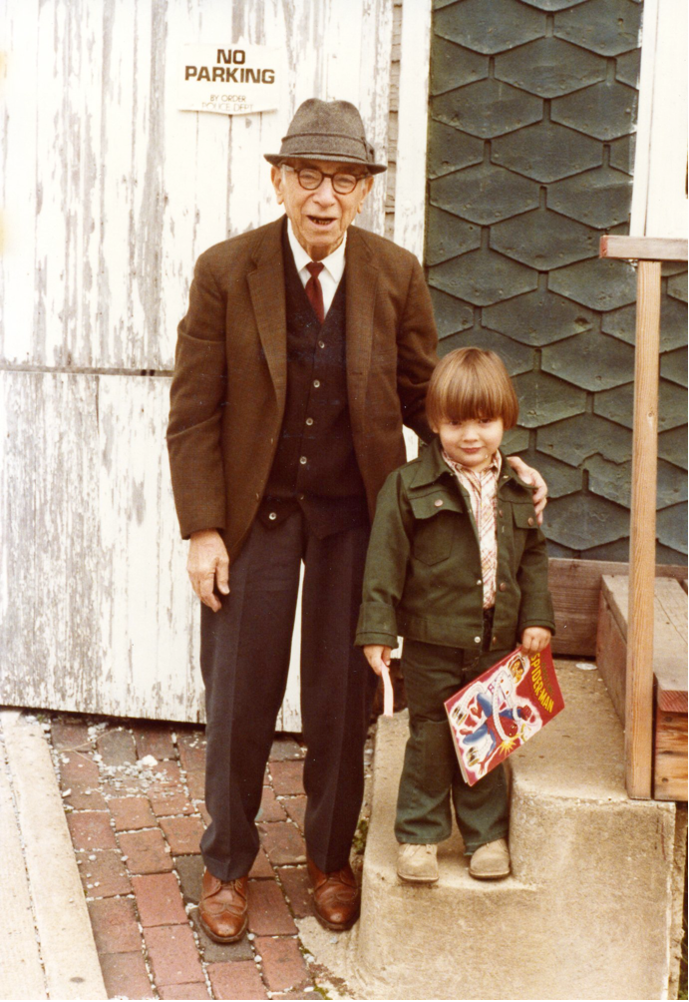 “Miss Fanny” was in charge of ladies’ and girls’ fashions, as well as decorating the store windows on W. Potomac Street. Unfortunately, we don’t have a photo of her. She was small in stature, but mighty in spirit. 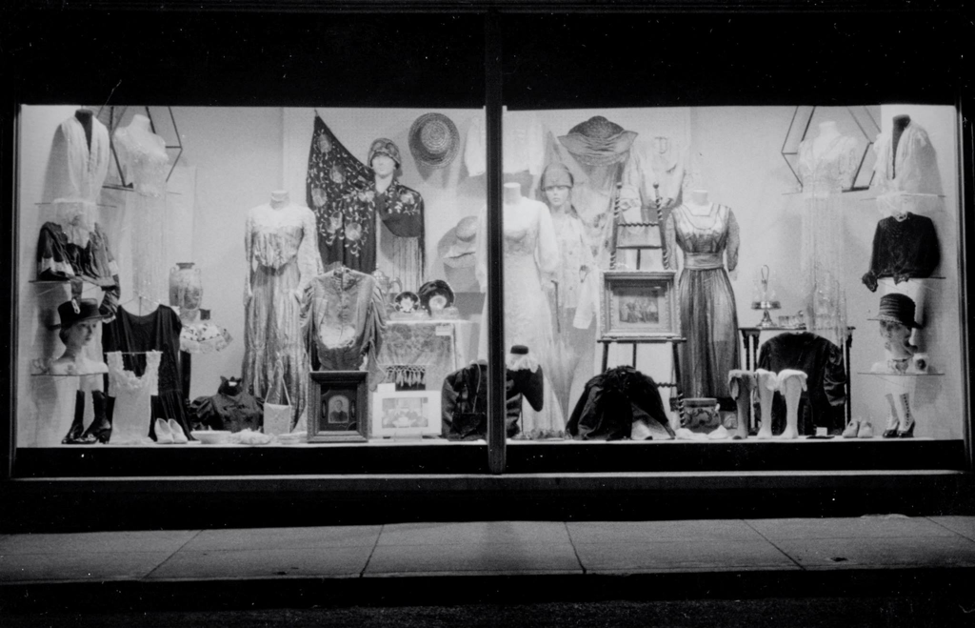 One of ”Miss Fanny’s” elaborate window displays at night

In the “Journey Stories” video, Bill Mohler remembered: “One of the unpleasant things was when Miss Fanny was redoing her windows and I had to help her. You’re right out there on Potomac Street; we’re taking mannequins down and dressing them and putting them back up. When you’re 14 or 15 years old and there is this little lady in there directing you around and everything but, on a leash, and then my buddies are riding by on their bikes waving at me and gesturing or whatever. Well, it wasn’t the best thing I liked to do, but Miss Fanny was just wonderful to me, and she made it very clear that I worked for her and not for anybody else down there. Mr. Myer told me I really worked for him.”

In a Brunswick Citizen article “Remembering Myer Kaplon” following his death, it was noted that Mr. Kaplon was in charge of window decorations, but in actuality Miss Fanny was the driving force.

Serving a small community, the Kaplons operated a highly personalized business. As did many downtown businesses starting from the Great Depression era, they faithfully extended credit to customers and knew everybody’s sizes.

Charlie Smith told this touching story of the Kaplon’s trust and generosity: “I was 14 years old. I went in (to Kaplons) and they had a black coat with sheepskin lining. I thought it was the neatest coat in the world. And I was always impressed with Mr. Kaplon that they had shoe racks with Florsheim shoes stacked all the way to the ceiling and they had a ladder that would slide along on a rack, and I thought that was coolest thing in the world that he could slide that ladder and run up get the shoes then come back down.“

Back to the coat, Charlie said “I had $8, and it was supposed to snow, but the coat was $14.00. I had $8 that I’d saved from mowing grass, and I did work in people’s yards and whatever to make money. I said I’d really like to have this coat. Can I put $8 down on it and I’ll come back; it’s supposed to snow, and can I come back and pay you for it after it’s done.”

“He said ‘What’s your name son? I told him who I was. He asked, ‘who’s your daddy?’ I told him who my daddy was, and he said ‘You come from good stock. Take the coat. Pay me when it snows.’ And I came back later and paid him my $6. He gave me credit when I was 14 years old.

“I think that’s what made Brunswick so good to grow up in at that time.” 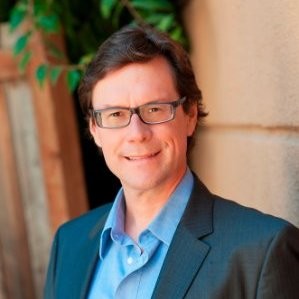