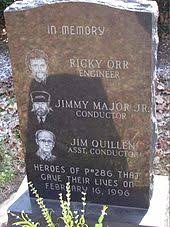 In memory of those who lost their lives aboard MARC Train P286 on February 16, 1996, on the 25th anniversary of the accident.

Near the Brunswick train station, in the grassy area between the station entrance and the caboose, sits an unassuming set of three monuments. You may have walked or biked by them and not noticed them on your way to the C&O Canal. Perhaps in the pre-COVID era you parked your car in the surrounding lot and quickly boarded the MARC train, barely having enough time for your morning coffee, much less time to stop and read them. Or maybe, since the pandemic, you have not been near that area at all. More likely, you have noticed them, but were not sure what they were or why they were there. This is their story. 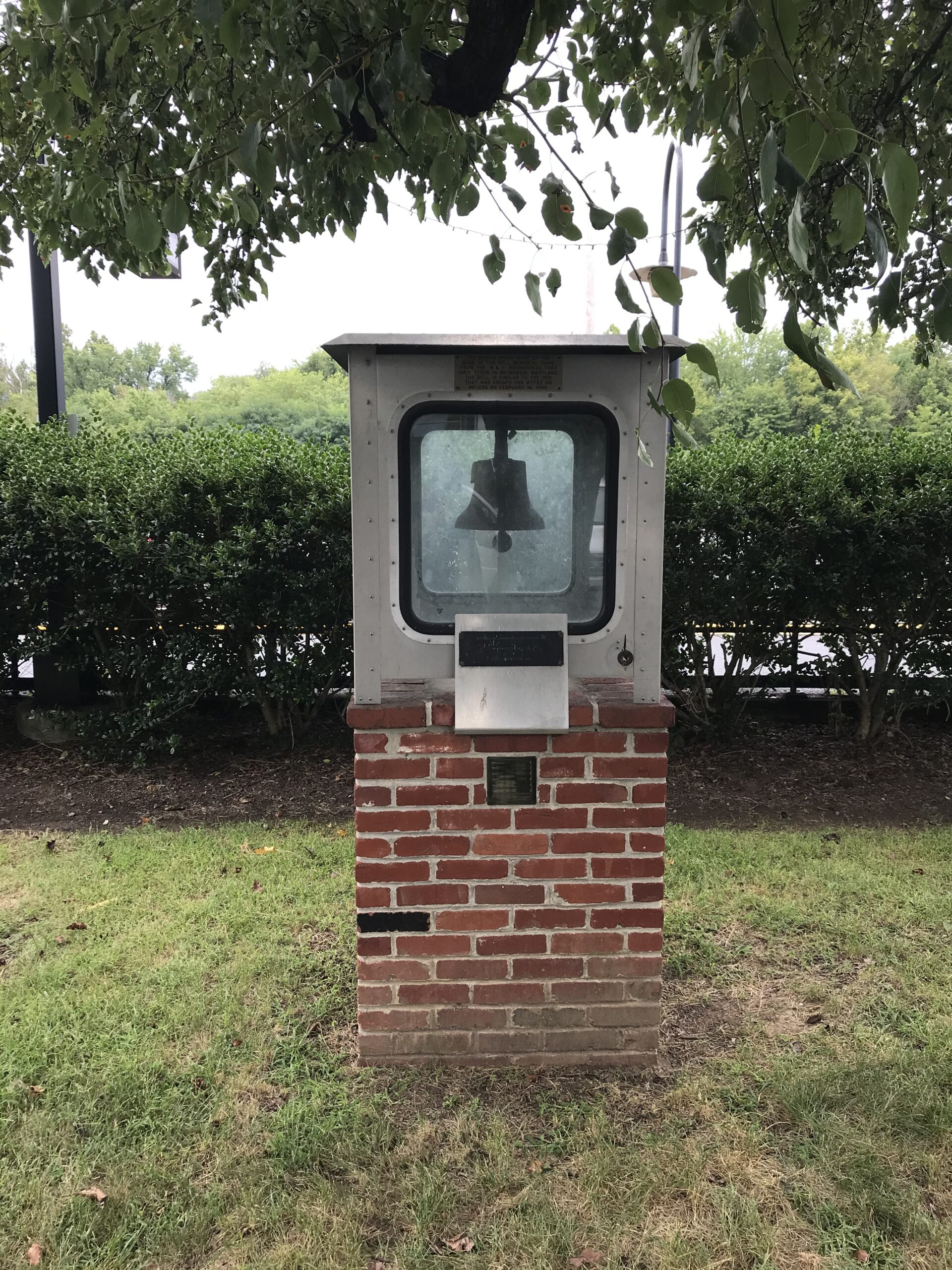 MARC Train P286 left the Brunswick, Maryland, station eastbound en route to Union Station in Washington, D.C., on February 16, 1996, at around 4:30 p.m. Aboard the push-pull commuter train were three crew members- Engineer Ricky Orr, Conductor Jimmy Major, Jr., and Assistant Conductor Jim Quillen- and twenty passengers, almost all of them students on leave and headed home from the nearby Harpers Ferry Job Corps. A steady snow blew that day, which would later prove to be unrelated to the cause of the accident near Silver Spring, Maryland.

AMTRAK’s Capitol Limited train left Union Station at 5:25 p.m. that blustery evening carrying four crew, fourteen service personnel, and 164 passengers. The train gained speed and sailed toward its eventual Chicago, Illinois, destination, not yet having knowledge that a stopped freight train ahead would mark its fate.

As the Amtrak approached the stopped freight train a routine maneuver- called a crossover-would allow them to switch tracks to pass the obstacle then switch back over after it was cleared, similar to passing a car on a two-lane road. A series of signals would alert the oncoming opposite direction trains- in this case the Union Station-bound MARC train- to slow, stop, or proceed with caution as the crossover process was completed. For reasons unknown, MARC train P286 either misread, misunderstood, or missed these signals.

Nearing the final stretch of tracks to complete the full pass, both the Amtrak conductor and the MARC conductor noted within their views something neither of them was expecting- headlights ahead on the same track. The missed or misinterpreted signals did not allow ample time or space for the MARC train to come to a full stop as the Amtrak train completed its crossover. Two of the MARC crew reportedly rushed toward their young passengers, telling them to get down and move toward the back of the car and brace for impact. The Amtrak conductor accelerated, believing with enough time and track he could complete the crossover and avoid collision. At 5:39 p.m., the trains collided, leaving in their wake eleven fatalities- including all three MARC crew members and eight of the young Job Corps students. Fifteen of the crewmembers and passengers of the Capitol Limited were injured.

Brunswick resident and B&O Railroad Conductor Leechel Reynolds responded to the community almost immediately, organizing fundraising efforts for the affected families and the development of a memorial for his colleagues and the additional victims. A local bricklayer- using bricks from the B&O Railroad roundhouse that once stood in Brunswick’s rail yard- built the short tower to hold the central monument- a memorial bell. The donated bell is similar to the bell aboard the train car of the P286. Train windows and materials make up the surrounding enclosure. The bell’s engraved plaque urged visitors to “ring the bell for Ricky, Jim, and Jimmy.” Friends, relatives, and community members gathered in September 1996 to dedicate the finished installation, and the gathering became a yearly tradition for several years.

As the years passed, the bell and its story became overlooked- the bell became tarnished, its plaques damaged, and the rope to use for ringing was broken. In the autumn of 2020, Friends of Historic Brunswick, Maryland, a local volunteer nonprofit, performed the tasks of restoring and reinstalling the memorial bell so that a new generation could learn the tragic story of train P286, and honor the memories of its victims by indeed ringing the bell. In addition, the City of Brunswick Mayor and City Council proclaimed February 16, 2021, the 25th anniversary of the accident as the P286 Day of Remembrance. Additional plans for the bell include fundraising to install an electric ringing system so the bell can more easily ring out with the simple push of a button and purchasing new plaques to replace the damaged ones.

Now that you know the story of the monuments and that tragic day, take a visit to the Brunswick railroad station. Walk to the area next to the station and visit the P286 monument. Read each inscribed name and take a moment to pause for each of the lives lost. Ring the bell in memory of the victims. Lastly, walk a few steps further to remember and recognize the efforts of Mr. Reynolds at an additional monument dedicated to him by his family.

*If you would like to learn more about the event, the book Train Wreck: The True Story Behind the Silver Spring, Maryland, Commuter Rail Disaster by Tom Low gives a thorough and moving account. 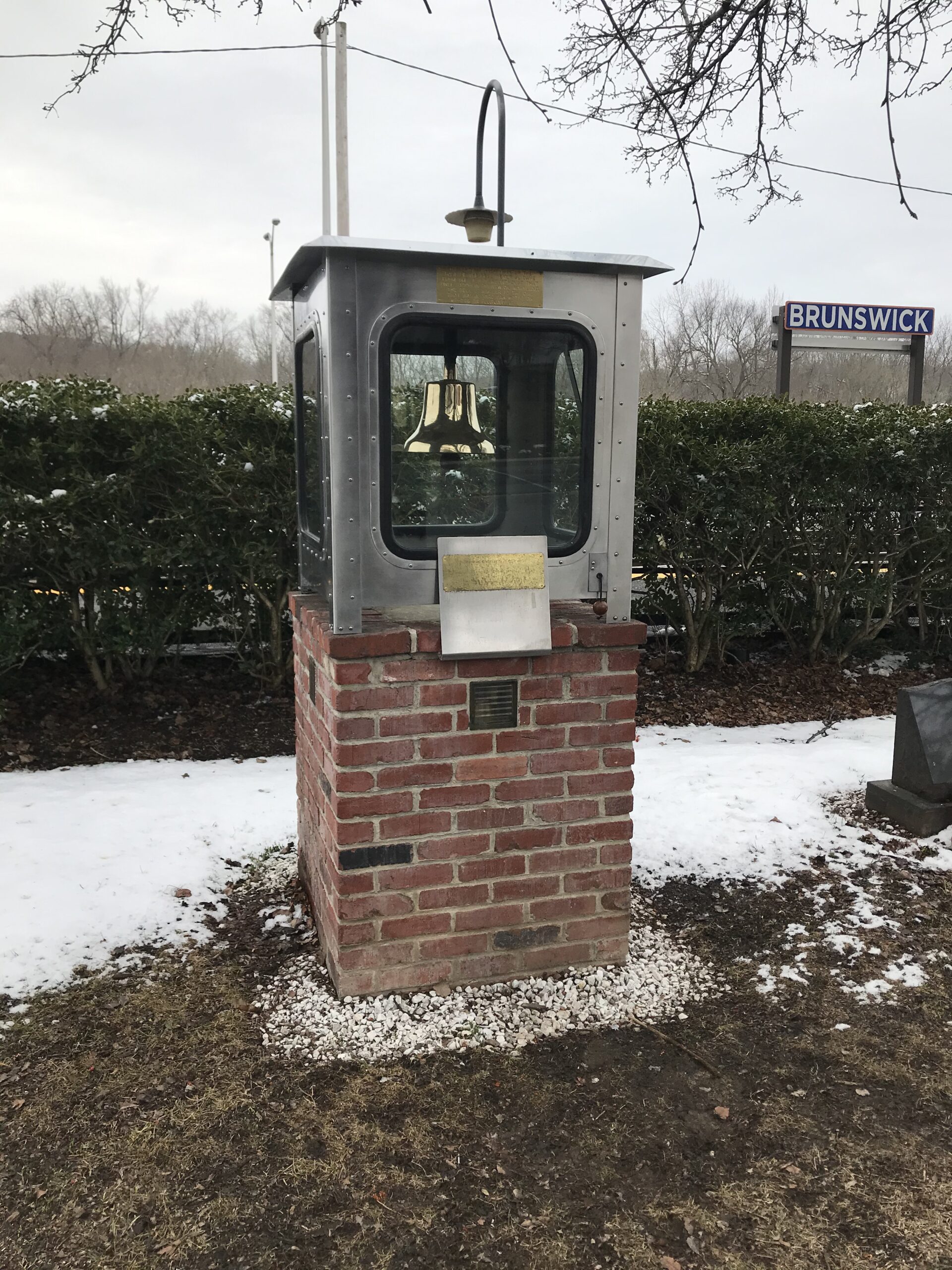