In Memory of Herman “Nook” Deener 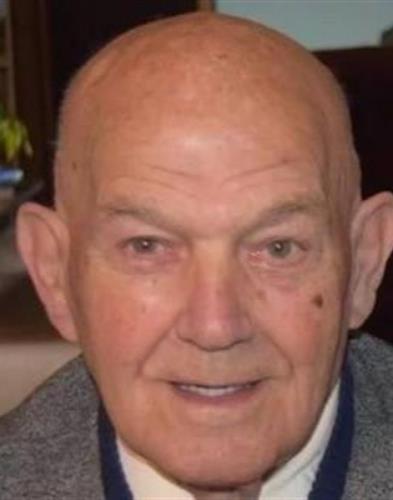 Herman “Nook” Deener went to be with his Lord on the morning of December 18th, 2020. He died at home in his own bed in the house he himself built. He was attended by his loving wife of 70 years, June Lee (Anderson) Deener. At last, he is out of pain and at last, he is out of his wheelchair. Today he is in Paradise with his Lord and Savior and literally running down streets of gold. Nook was a devout Christian and an ordained Deacon of the First Baptist Church in Brunswick, MD where he faithfully and dutifully attended until the onset of the Corona plague earlier this year. He prayed and read the scriptures every day of his life. He enjoyed a good cigar now and then but never smoked a cigarette and never had a drink of alcohol in his entire life. Nook was the fourth of seven children.

Herman Deener was born on September 20, 1931 in the family farmhouse in Knoxville, Md. He was the son of the late Herman Deener and the late Daisy Cooper Deener, who later remarried and passed away as Daisy Fauble. Herman Deener had no middle name and was known around the county and by friends and family as “Nook” Deener, a nickname given to him by his father also named Herman. Throughout the late ’40s, ’50s and early ’60s, the name ‘Nook Deener’ was synonymous with baseball. High school teammates and competitors referred to him as “Nookie”. His children, grandchildren, and unrelated others who looked upon him as a father figure simply called him “Pop”.

Nook was a retired Railroader having served as a mechanic, carman, car yard foreman and later promoted to the position of “Wreck Master” for the Baltimore and Cumberland Divisions of the Baltimore and Ohio Railroad (later the Chessie System and eventually CSX Railway). Wreck Master was a title he cherished and a job he performed with zeal and fervor until he retired in the late 1980’s. He was responsible for re-railing train cars that jumped the track as well as for clearing major rail catastrophes throughout the system. He worked until full retirement age even after suffering multiple injuries and subsequent surgeries. He spent the remainder of his life in constant pain but when asked how he was doing, he would always reply, “pretty good”.

Nook was best known throughout much of his life as one of the most outstanding and multi- talented athletes in the region. During his Brunswick High School years, he was a five-sport star athlete. He was an outstanding soccer player and played varsity basketball. He ran track in the spring and in the fall ran as a Cross Country runner holding the rare distinction of being the Maryland State High School Cross Country Champion for three consecutive years…. a singular unparalleled feat. He likely would have won the fourth time were it not for a devastating injury he incurred while playing soccer against Thurmont High School (the field now sits under present day Thurmont Middle School).

He achieved some notoriety for other feats of strength and athleticism and was reportedly to have skated on the frozen Potomac River from Weverton Crossing to the Brunswick Bridge and back. Frequently during his youth, he would forego the school bus and run home from High School Hill in Brunswick all the way to the family farmhouse on Payne’s hill in Knoxville. He was freakishly strong. Railroad workers in the car yard would gather round to witness him pick up a set of railroad wheels and adjoining axle and set if off of the rail for no other reason than to prove he could do it.

Although a multi-talented athlete, Nook was best known for his outstanding ability as a baseball player for Brunswick High School and for playing in local adult Baseball leagues during the ’40s, ’50’s and ’60s when Baseball was king. He was a superb catcher behind the plate but in the batter’s box as a hitter he was tremendous. Known and feared by opposing pitchers for hitting “the long ball”, he was scouted by professional big-league scouts as a tenth and eleventh grader and was called for tryouts with the then New York Giants. He was reasonably assured a professional baseball contract pending graduation. Unfortunately, in the fall of his senior year, the previously mentioned, devastating, compound fracture of his leg in the Thurmont soccer game doomed his professional baseball career aspirations. This was a seminal, life-altering event. He continued to play in local baseball leagues for the next 20 years and in 1959 was one of the star players for the Championship Brunswick Team in the famed Maryland State League.

Nook graduated from Brunswick High in 1950 and immediately went to work for the Railroad in the Brunswick car yard near ‘New Addition’. He and June were married that year while June was still in High School. While working for the B&O Railroad, he spent his off-duty hours building their house on Chick Lane in Rosemont, Md. where he and his wife June raised three children: Herman Michael Deener, Dale Mitchell Deener, and Kristi Michele (Deener) Mitchell and where he resided until his passing on the morning of December 18th.

Nook was a devoted family man who sacrificed his time, efforts, finances, and personal wellbeing to enrich the lives of his children and grandchildren. He built his home and built his family in the ways of the Lord. Many times, in years past, he would walk to work from Rosemont to Knoxville in order to save gas money that he instead used to purchase baseball equipment for his boys and a pony for his daughter. He planted a large garden every spring in order to keep down expenses for the summer and to can and preserve food for the winter.

He volunteered to coach Little League Baseball for many years and later managed one of the local Babe Ruth League teams. Nook’s primary mission with the Little League and Babe Ruth teams was, in his own words, “solely to build ball players”. When asked frequently why it seemed that his teams never won the championship even though it appeared that he had the better players, he replied that he was “more interested in building great young men and excellent athletes than he was in winning titles”. He played everyone. Everyone got a chance. He developed and trained every kid and made them better for the experience. Although his teams never won the pennant races, he managed to have more of his players chosen for the All-Star teams than were chosen from any other team in the league. He was loved and respected by all.

In order to pay college tuition for his three children, Nook worked a second job as a carpenter in addition to his railroad career. All three of his children became college graduates; each with multiple advanced degrees. All six of his grandchildren are college graduates as well.

Nook was an avid sportsman. He loved rabbit hunting and kept beagle hounds for many years. He also loved horseback riding and kept horses and ponies until his leg pain from earlier injuries forced him to give up both activities.

Nook is survived by his wife of 70 years, June Lee (Anderson) Deener of Rosemont; two sons, Herman Michael Deener and his wife Annette of Sharpsburg, MD, and Dale Mitchell Deener who put his life on hold for several years to devotedly attend both parents in the family home in Rosemont. He is also survived by his loving daughter Kristi Michelle (Deener) Mitchell of Venice, Florida. Nook and June have two grandsons, Adam Eshbaugh and wife Brigid of North Carolina, Matthew Deener and wife Sarah of Walkersville, MD; and four granddaughters: Megan (Deener) Gouker and husband Brad of Boonsboro, MD; Leah (Mitchell) Zehnder and husband John of Oklahoma City, OK; Meredith Deener of Baltimore, MD and Makenzie Deener of Omaha, Nebraska. June and Nook were blessed with five great grandchildren: Delaney and Max Eshbaugh, Naomi and Quinn Deener, and Chloe Gouker. Nook is survived by one sister, Gloria “Dimpy” Ayres and husband Donald and two younger brothers: Sam Deener of Falling Waters, West Virginia and Donald Deener and wife Gloria of Brunswick, MD. Nook and June also have dozens of nieces and nephews on both sides of the family too numerous to list here.