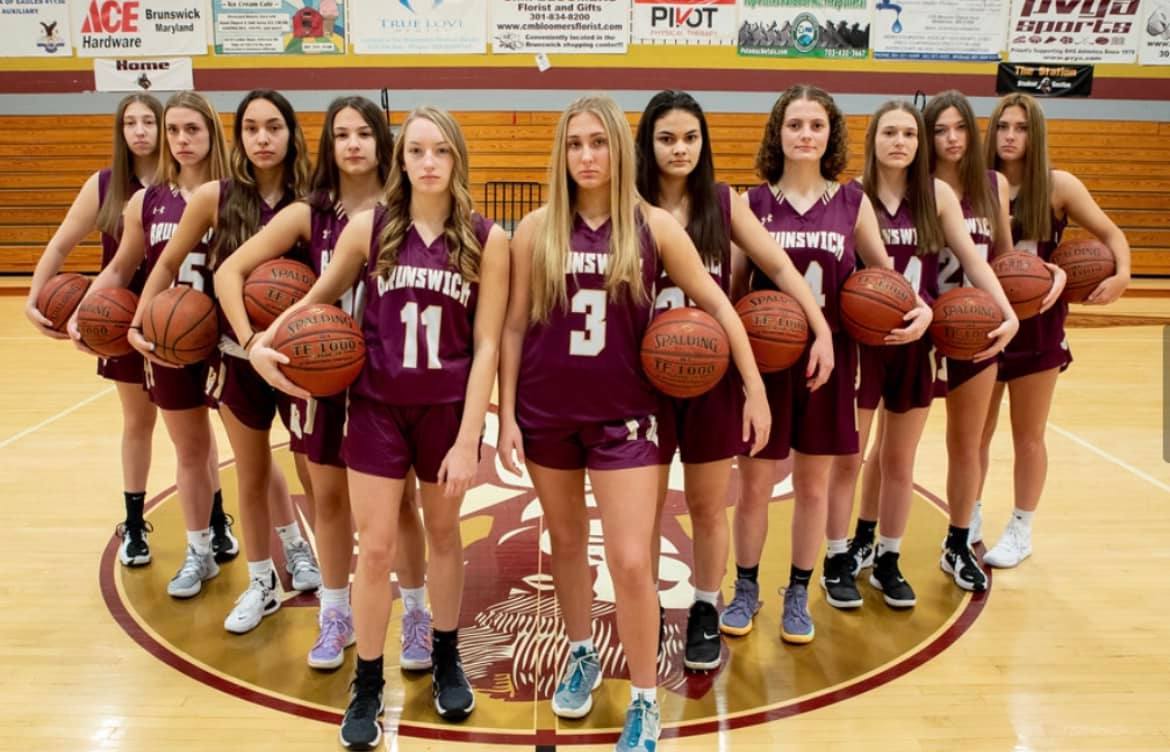 The Railroader girls, under first-year coach Cindy Wilhelm, have shown remarkable improvement in recent years. Brunswick went 9-11 in the regular season, just missing a shot at .500 in a 57-36 home loss to the Williamsport Wildcats on Friday (Feb. 18).

Brunswick’s boys, also with a new coach in Larry Brown, who coached the BHS girls last year, struggled this season, going 3-17. The Railroader boys ended their regular season on Friday (Feb. 18) with a 62-41 loss at Williamsport.

Both teams now set their sites on the Class 1A West, Region II playoffs, which begin Friday (Feb. 25). Most likely, Brunswick’s girls will play at home in the quarterfinal round. The Railroader boys will, most likely, play on the road.

Quarter-final round pairings will be announced later.

BHS GIRLS
While there was some disappointment in not reaching the .500 mark, Wilhelm noted the team did achieve a goal of winning more games than in previous years.

“If you take on our whole season, I think we’ve done an excellent job,” Wilhelm said. “Our goal was to try and at least have a .500 season, but we came pretty close. I think 9-11 is a pretty good job”

The main issue in the Friday night loss to the Wildcats was Brunswick’s inability to contain Williamsport guard Paige Smith. Smith led all scorers with 25 points. Her strong inside presence at both ends of the floor, along with her ability to force the Railroaders into unforced errors, was an issue for Brunswick.

“We got caught up in those transition buckets early,” Wilhelm said. “Paige is a great player and we got caught watching her. She can create. We can let her score, but we can’t let her create. We had trouble making that separation.”

Williamsport opened up a 15-8 lead in the first quarter, then were up 34-18 at the half. Smith did most of her damage in the second half, scoring 17 of her 25 points during that time.

Cassidy Rhodes led Brunswick with 17 points, which included a 9-of-10 effort from the foul line. Wilhelm said she thought Rhodes had a nice floor game.

BHS BOYS
Brunswick picked up its third win of the season on Tuesday, Feb. 15, turning back Clear Spring, 72-63. Ricky Cicmanec led the Railroaders with 16 points, seven assists and four steals.

Cameron Cornett and Ethan Genos each had 15 points for Brunswick. Bryton Schnur had nine rebounds. Genos had seven. Caleb Shullenbarger had five steals

Brunswick won the junior varsity game, 52-30. Jake Genos had 18 points for the Railroaders. Michael Santamaria had 16.

In the rematch with Clear Spring on Thursday, Feb. 17, the Blazers defeated the Railroaders, 66-54. Shullenbarger had 16 points. Schnur had nine points with seven rebounds.

Finn McGannon had 10 rebounds for Brunswick. Cornett had four assists and four steals.

Brunswick won the junior varsity game, 59-30. Jake Genos had 13 points. Santamaria had 12. All 10 Brunswick players scored in this game.

Brunswick defeated the Wildcats in the JV game, 36-31. Jake Genos had 12 points.

The Railroaders came away with a big win over rival-Middletown on Friday, Feb. 4, defeating the Knights, 61-58. Schnur had 18 points, six rebounds and three assists. Shullenbarger had 11 points with five steals. Leif Elfrey had 10 points with four rebounds.

Brunswick won the JV game, 45-30. Jackson Dudley had 18 points for the Railroaders.